For Workers’ Strikes to Smash Austerity!

The following is a translation of a French-language statement produced for distribution in Montreal on May Day. 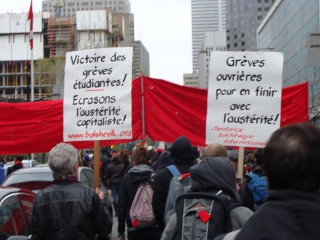 IBT contingent on CLAC-organized demonstration in Montreal on May Day

The Liberal government’s decision to raise tuition fees by 75 percent represents an attack on working people and the poor. It is part of a generalized austerity offensive by ruling classes aimed at restoring profitability and escaping the consequences of the capitalist crisis. The mass student strike that has rocked Quebec since mid February is one of the high points of global anti-austerity resistance organized by hundreds of thousands in Greece, Spain, France, Italy, Britain, the United States and elsewhere in recent years. As the Quebec student strike has grown and gained momentum, spreading from the universities and cégeps to the high schools, it has revealed the intensifying contradictions at the heart of this society.

Predictably, the repressive apparatus of the capitalist state—cops and judges—has been used in attempts to crush the movement. Hundreds of protesters have been arrested, many “preventative arrests,” in the largest wave of detentions since the October Crisis of 1970. Police have assaulted demonstrators with sound bombs, tear gas, pepper spray and clubs. Many youth have been seriously injured, including Francis Grenier, who was partially blinded by the Montreal police while playing his harmonica at a demonstration outside the offices of Loto-Quebec. Cops are not part of the working class!

The student strike has become the target of frenzied denunciations by those with far-right sympathies. In a letter to Le Soleil (12 April), Bernard Guay, director of taxation at the Quebec Ministry of Municipal Affairs, openly proposed using the tactics of “the fascist movements” of the early 20th century to crush the protests:

“We must organize to regain ground. In the 1920s and 1930s, that’s what the fascist movements did by giving leftists a taste of their own medicine. The latter have retained a memory so bitter that, three quarters of a century later, they still are bent on demonizing this political safety reaction. Strike opponents must work together and organize en masse to cross the picket lines and go after those who wear red squares where they encounter them, challenging intimidation.”

For the time being the ruling class prefers to rely on the police to “regain ground” rather than gangs of scabs and fascists. Yet the bourgeois press has routinely portrayed the protests as “violent,” thereby facilitating police repression and justifying attacks by the far right.

Line Beauchamp, minister of education, demanded that the main student organizations condemn “violence” on the demonstrations as a pre-condition for negotiations. Of course, the real violence is that inflicted by the police on people engaging in acts of civil disobedience. Marxists do not regard self-defense by protesters or property damage as “violence.” Breaking windows and overturning cop cars are not usually effective tactics, but revolutionaries defend those militants who imagine that such acts somehow pose a challenge to the system. Drop all charges now!

What really scares the ruling class and its politicians is the prospect of the mass political radicalization of Quebec youth. Even the petty bourgeois reformists of Québec solidaire (QS), who present themselves as left-wingers, share this concern. While denouncing “the vandalism of provocateurs who don’t respect the will of the students who want to express themselves firmly but peacefully,” QS MNA Amir Khadir was chiefly concerned that the government’s intransigence risks destabilizing the bourgeois social order:

“It is irresponsible to end the dialogue with 200,000 students using the excuse of the vandalism of a handful of thugs. The government acted in bad faith and that’s enough! It must return to the negotiating table with all students rather than inflame tensions, playing the pyromaniac firefighter!”
—“Conflit étudiant : Québec solidaire lance un appel au calme,” 26 April

Beauchamp speculated that “certain people are profiting” from the demonstrations: “I think that’s because they want to pursue other causes, so-called social causes” (Radio-Canada, 25 April). The government’s attempt to impose extortionate tuition fees is rooted in the desire of bankers and the capitalist elites to make working people pay for their crisis. Beauchamp fears that the protests are providing the students with the sort of education they can’t get in a classroom.

Obviously, the leadership of two of the student unions—the Fédération étudiante universitaire du Québec (FEUQ) and the Fédération étudiante collégiale du Québec (FECQ)—cannot be accused of trying to promote revolutionary consciousness among their members. The Coalition large de l’ASSÉ (CLASSE) seeks to pose a more radical alternative. The CLASSE not only opposes tuition hikes but also calls for “free education” and a “more egalitarian, solidaristic and just society” (www.bloquonslahausse.com). It proposes that free education is a “realistic project” that can be achieved simply by “ceasing to give the rich tax reductions of $950 million like in 2007 or by using the budget allocated to the universities to ensure the quality of teaching instead of allowing research funds to disappear, often to the benefit of private firms” (Ibid.). Serious militants in the CLASSE should ask themselves exactly how “realistic” it is to expect the bourgeois government to do anything other than “serve and protect” the interests of the capitalists. Any concessions that students win will result from hard struggle and the bosses’ fear that failing to make some reforms might push thousands of youth further to the left and embrace demands that point beyond the framework of capitalism.

Student strikers have shown ingenuity as well as remarkable bravery and determination on the demonstrations and picket lines. The government has sought to minimize the importance of the movement by insisting that this is not a strike but merely a “boycott.” According to Jean Charest: “This is not a strike....The Quebec government is not the employer of the students and students are not employees of the Government of Quebec” (Canadian Press, 10 April).

While the students have disrupted “business as usual” at the universities and cégeps, their strikes lack the social power to bring the wheels of the capitalist economy to a grinding halt. Most students come from a working-class background, and many hold part-time (and even full-time) jobs to help pay for their studies, but student strikes amount to a combination of consumer boycott and political protest. If the student strike spreads to the organized working class, as it did in Paris in 1968, the possibilities are enormous. If a significant section of Quebec unionists were to walk out in solidarity with the students, Charest’s austerity drive could be smashed—and such a victory would not only shake Quebec society to its core but would reverberate in the rest of Canada and, through the English-Canadian proletariat, find an echo within the powerful U.S. working class.

Some students have been attempting to forge links with workers. Students demonstrated in solidarity with the 800 laid-off Aveos workers at the Musée des Beaux-Arts in Montréal on 25 April. There is undoubtedly a lot of sympathy for the striking students in the union ranks—but the bureaucrats who control the unions are tied to the bourgeois Parti québécois and have no desire to lead any serious struggle against the bosses.

The Alliance sociale, founded a year and a half ago by the main trade-union formations (FTQ, CSN, CSQ, CSD and SFPQ) along with the FEUQ and the FECQ, was supposedly designed to resist government austerity attacks. But the real perspective of the union tops is clear from its founding document, “Un autre Québec est possible,” which, in addition to a few reforms, proposes “social dialogue” with employers to strengthen Quebecois capitalism:

“For this, we rely on the establishment of a social dialogue that would focus the true contribution of workers in the development of work organization and innovation in enterprises.”

The reformists who lead Quebec’s powerful trade unions, like their understudies among the student movement bureaucrats, are wedded to the perspective of class collaboration. They are, in the final analysis, the ideological agents of the ruling class.

The magnificent struggle carried out during the past several weeks by Quebecois students should inspire people across North America to resist similar austerity attacks by the ruling class. Ultimately, however, the endemic problems created for the mass of the population by the operation of a social system based on production for profit can only be eliminated by expropriating the capitalists and establishing a planned economy, run by the producers, to serve the interests of working people and the oppressed.

What’s needed is a struggle to oust the pro-capitalist union bureaucrats and replace them with a new, revolutionary leadership committed to a program of consistent class struggle. Such a leadership will not arise spontaneously—it must be built. The key to this is a process of political regroupment based on drawing a serious balance sheet of the lessons of the socialist movements of the past—both their successes and their failures—and a commitment to forging an internationalist revolutionary workers’ party that can unite the most combative and politically advanced elements in Quebec with their sisters and brothers in English Canada and beyond. The International Bolshevik Tendency is dedicated to the project of winning a new generation of militants to the struggle for world socialist revolution, and we look forward to actively cooperating with all those who share this goal.